Here at AcuPUNKture, we are planning ahead in case we are not able to safely re-open our doors to the public in 2 weeks due to the COVID-19 outbreak and current need for quarantine and social distancing.
Over the next couple of weeks we will be preparing for and piloting Virtual treatments  in which existing clients can book tele-treatments with us and enjoy a guided treatment from the comfort of their homes. During these sessions we will communicate via phone or video-chat while I guide you through the treatment. Prior to this appointment I will send out an “At home Acu-kit” to your home with all the essentials needed for 4+ treatments.
If you have acupuncture coverage through insurance, you will be able to utilize insurance with these treatments as I will be guiding you on insertion points for applying press-needles along with magnets, essential oils, salves, gua-sha for myofacial release and more. Out of pocket price for treatment will be $70 and includes your at home Acu-kit. All modalities of payment currently used at the office will be accepted including flex-spending and HMO accounts.
This is what Japanese acupuncture is all about- Using all of our modalities and “tricks in our tool box” to achieve powerful treatments when we can only do minimal needle insertions!
During your 60 minute tele-consult & treatment I will also be available to answer any self-care questions and recommend any nutritional or supplementation advice. For clients that already have an at home cupping set or wish to purchase an inexpensive set for guided at home application this is available also.
Each kit will be customized and may contain:
-A Gua sha spoon for guided myofascial/muscle release
-Mini essential oil bottles filled with Snow Lotus Organic essential oils tailored to the client’s specific/usual needs- we can discuss prior to sending out
-15 Ibuki moxa (stick-on moxa)
-One 10 pack of 800 gaus reusable acu-magnets (able to continue to wear after session and reapply later)
-Two 12,000 gaus reusable magnets (very strong for use only during session)
-20 Pyonex press needles
-20 Ear Press balls with picture reference cards of applicable ear points
-Small Gemstones appropriate for each client (if desired)
-1 Therapeutic Organic Essential Oil infused Epsom Salt packet for soaking
-1 roll of micropore tape for taping magnets and crystals to acu-points
We realize this type of treatment may not work for everyone and that is totally okay! We also realize that even if we are able to reopen our doors to the general public- our severely immune-compromised clients maybe not be able to physically come in to the office for fear of catching COVID-19 and therefore they can utilize this type of treatment in the future.
If you are interested in this new venture please reach out to us at bostonacupunkture@gmail.com
This is going to be new for everyone, including us, and there will be some kinks to work out both via the booking website, getting your your acu-kit in a timely manor and connecting via online in a HIPPA-compliant way, but we look forward to this new journey with you and helping to continue care for our wonderful clients while promoting love, light and healing during this unknown, dark and scary time.

Vanessa Ly comes from a long lineage of Peruvian seers. Her gift was passed down to her through her grandmother Valentina Mendoza, in honor of whom La Baronesa Valentina was named. Since the age of 14, Vanessa’s ancestors have spoken to her through the tarot. She incorporates her intuitive teachings during her therapy sessions to provide clarity to those who seek her.

We are happy to announce that Intuitive Therapist/Seer, Vanessa Ly, will be hosting monthly office hours at AcuPUNKture!

Schedule your 30 minute reading below! 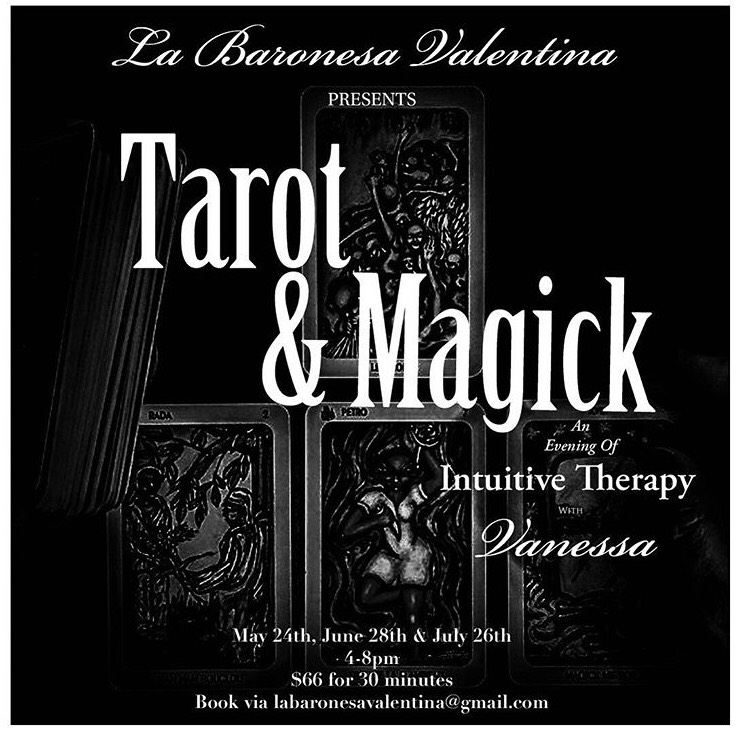 What is Shamanic Energy Healing? Explained by Katie:

A shamanic energy healing works to clear blocks in your chakras (energy centers) and fills them with healing, positive energy. Throughout life we hold on to emotions/traumas/limiting beliefs and push them aside without acknowledging or releasing them. These traumas/emotions/limiting beliefs stay within our energy bodies and continue to present themselves until healed. They can resurface as a physical aliment, fatigue, despondency, or many other forms. A shamanic energy healing can aid in clearing blocks from childhood, the present, past lives, and blocks passed down through the lineage all while you lay down and relax. While healing I am in connection with mine and your spirit guides. I use my intuition and their guidance to feel and move through your energy. At times I may also receive messages or information from the Divine, Archangels, and/or ancestors. Each person is unique and ever changing, therefore, each healing will be unique to the person and their energy. If your energy is calling for it I may incorporate different tools (crystals, oils, reiki, etc)  into a healing.  This can be done in person or from a distance. Contact me and we can set up an appointment.

Katie now has weekly in-house office hours at AcuPUNKture.  Visit her website for more information and to book your healing session via her website below!

A story on growth.

Scott Sanders is the creator of CancerWell.org, which provides resources and support for anyone who has been affected by any form of cancer. He is also the author of the book Put Yourself First: A Guide to Self-care and Spiritual Wellness During and After Cancer Treatment, coming Summer 2018!

After being diagnosed with cancer, it may seem difficult to focus on yourself, especially when your mind is racing with how you are going to fight this. During one of the hardest times of your life, it’s important to take a moment and practice self-care. This will not only improve your quality of life during treatment, but help you improve your spiritual and mental health when you need it the most.

Make sleep a priority
We spend one third of our lives sleeping, and it plays an important role in making sure our body and mind is rested. This is especially important when you’re going through cancer treatment. Radiology, chemotherapy and other drugs that are fighting cancer can cause you to feel tired and weak. If you’re having trouble sleeping, try coloring in a color book before bed. It can relax your mind and put it at ease. You can also try taking a warm bath or drinking tea to get a good night’s sleep.

Safe use of opioids
Cancer can be painful, depending on the type you have been diagnosed with. In some cases, doctors will prescribe opioids to assist with the pain and provide you with relief. However, it’s important to keep in mind that while opioids can be successful in providing you pain management, they can also be highly addictive. In order to prevent opioid addiction, you have to practice safe use of this medication. If you notice yourself becoming dependent on opioids, or if you have to keep taking more and more to relieve the pain, talk to your doctor. He may be able to prescribe other natural pain relievers that you can try.

Spend time with loved ones
Being diagnosed with cancer can make you feel lonely, especially if no one you know is going through it. That’s why it’s crucial to spend time with loved ones during your treatment. This doesn’t mean you have to do anything crazy like going on a trip or going out on the town. You can simply watch a movie together or read together. Being around people while you’re going through treatment makes all the difference. When you’re diagnosed with cancer, you may also realize how precious life is, and that you actually do have the time to spend with people you care about.

Start a cancer journal
You probably feel a lot of emotions while you’re going through cancer treatment. Whether you’re sad, grateful or determined, writing down your feelings in a journal can help you get through your treatment easier. Expressive writing, or writing that focuses on your thoughts and feelings, has actually been proven to increase the well-being of cancer patients. Some reasons why journaling is beneficial is because you can be open and honest, you can process what you’re going through and it can help put things into perspective. When you start journaling, take just a few minutes every day to write down what you feel, and then build from there.

Practice yoga and meditation
Going through cancer treatment, you may feel lost and defeated. Yoga and meditation can not only enhance your spiritual, mental and physical wellness, but these practices can provide you the peace you need to stay tough through treatment. Yoga is the art of posing and stretching while focusing on your breathing and staying in the moment. Meditation is the art of focusing on your breaths and practicing mindfulness. During chemo or after surgery, it may be hard to recognize your body. Yoga and meditation can help by allowing you to reconnect to your body emotionally and spiritually. These exercises can also greatly improve your quality of life while you fight cancer.

New store #hours starting February 1st 2023!! Now closed on Sundays!
Processing…
Success! You're on the list.
Whoops! There was an error and we couldn't process your subscription. Please reload the page and try again.
Loading Comments...